FROM MEDINA TO JORDAN BORDER

Julian Heynen: These pictures literally progress along a line that starts in Medina and leads north towards Jordan. Path, route, destination: the viewer’s gaze is often drawn into the distance along a railway line. This route through the desert is an ancient pilgrim’s way. But it is also seen in these photographs as the (similarly long defunct) backbone of a wholly modern mode of transport.

Ursula Schulz-Dornburg: The railway from Damascus to Medina was built by the Ottoman Empire in the early 1900s with technical assistance from the German Empire. Besides being intended for pilgrims it was also an instrument used by the colonial powers in this part of Arabia. As before in Mesopotamia, my initial interest was in the different historical layers of this route. It goes right back to the second millennium BCE; later it became an incense route and a path for Muslim pilgrims, and now it is strewn with the remains of railroad tracks. All along it there are the same, simple railway stations, designed by a German engineer. They look utterly alien in this landscape, as though an exponent of Minimal Art or Land Art had been at work here.

JH: Did your observation of the remains of the railway line maybe have something to do with a feeling of futility, with the idea that ‘the desert always wins’?

USD: No, not at all. Even if things do gradually disappear in the sand — there will always be decay, destruction and war — traces still linger on, which we can activate through our observations. Although it is true that some traces of the past are barely perceptible and certainly not decipherable.

JH: Pursuing those different historical traces sometimes comes to a halt at the point where the usual definitions and concepts no longer apply.

USD: As in some of my other groups of works, the horizon is particularly important as a line that I can use as a point of reference.

JH: Yes, the horizon almost seems like a spirit level, a way of calibrating your own standpoint with that of the object in your sights.

USD: In formal terms the horizon line certainly gives the picture a sense of security, a steadiness. But the horizon is also the line marking ‘the end of the Earth,’ that’s to say, a boundary. I’ve always loved travelling not just downwards into time but also upwards into the universe.

JH: The horizon is also a ‘land in between’, a no-man’s land. Even if you think you might nearly be there, it constantly recedes. In fact you can never reach it, it is always an unattainable destination. 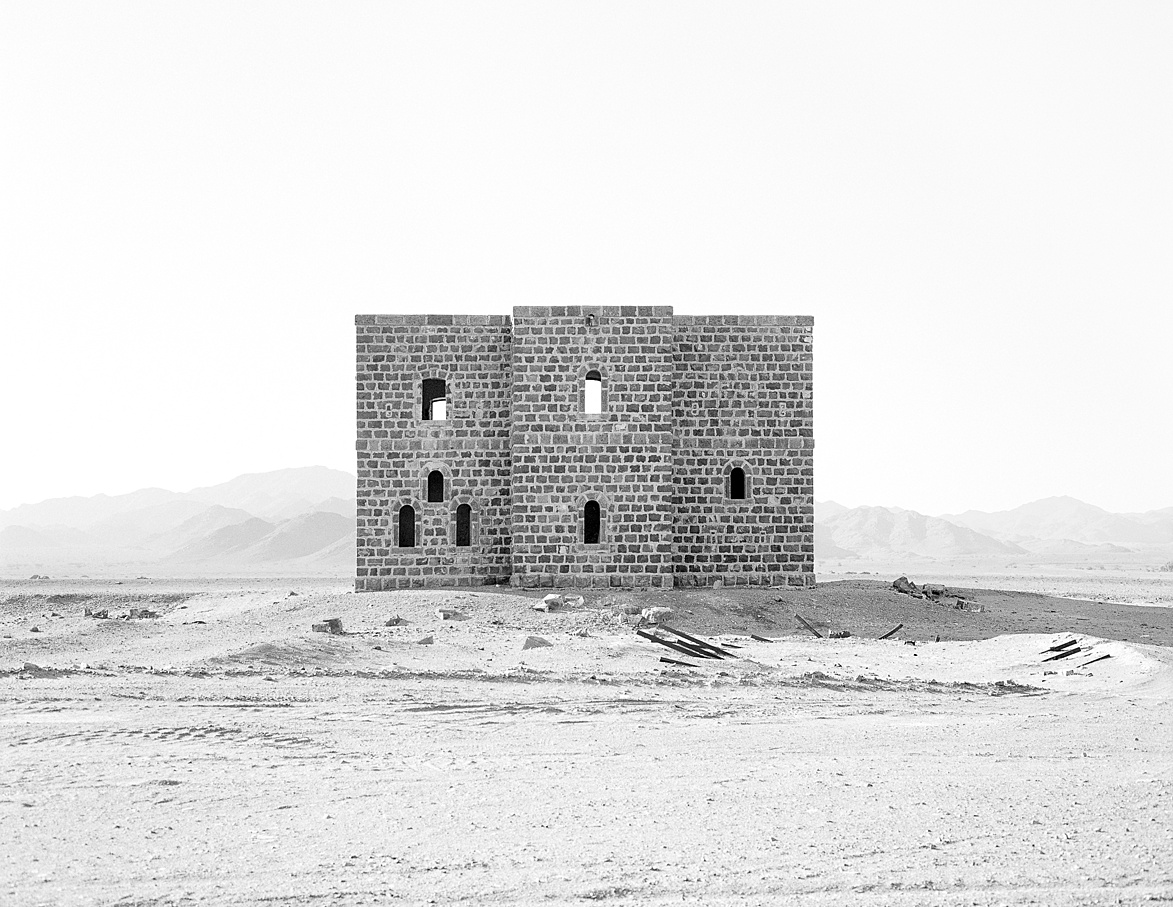 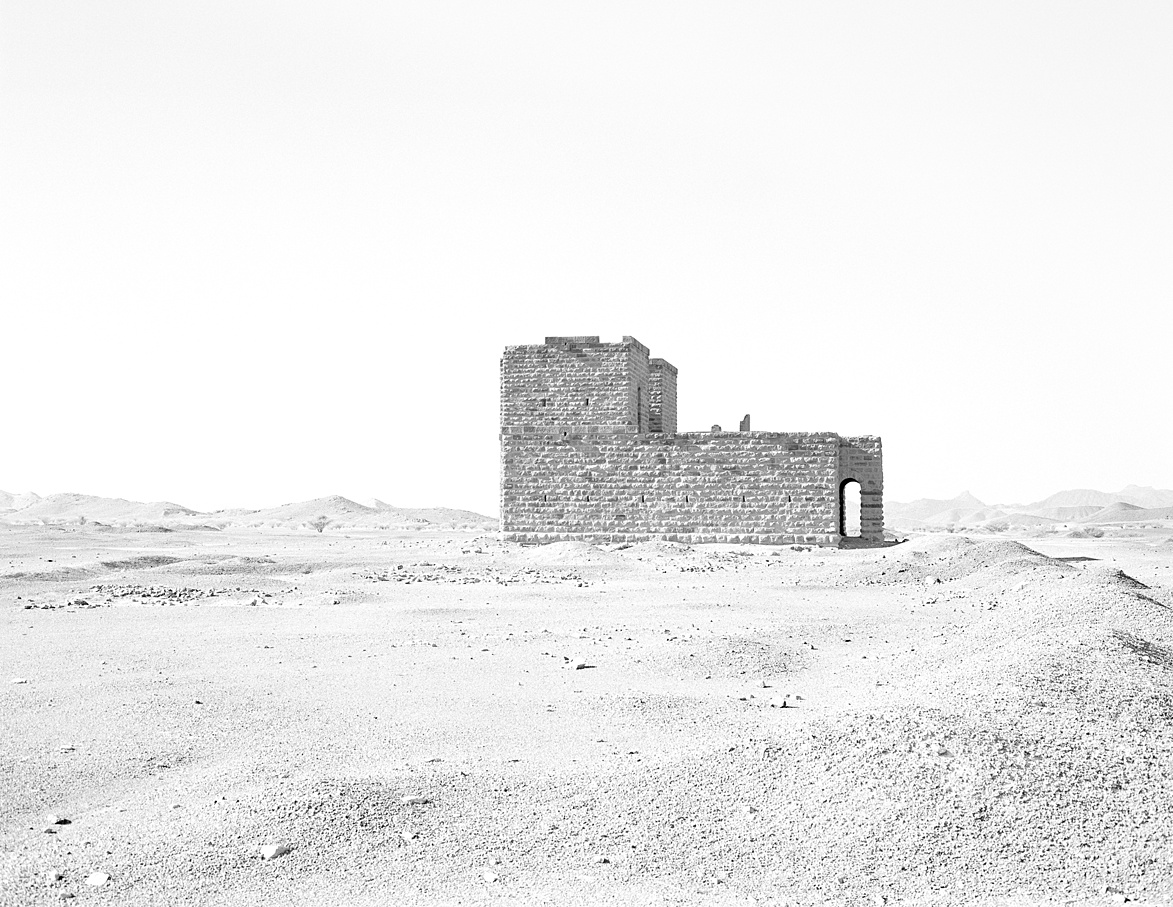 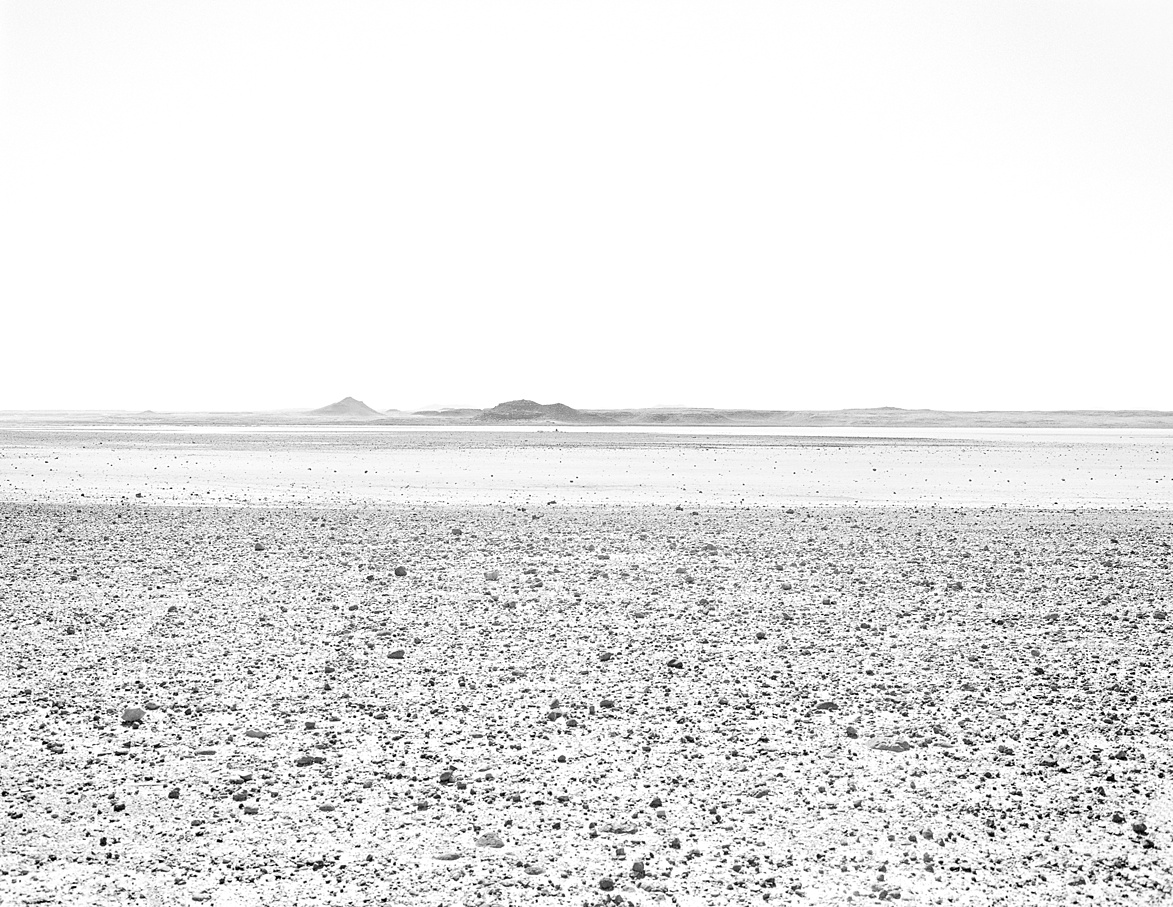 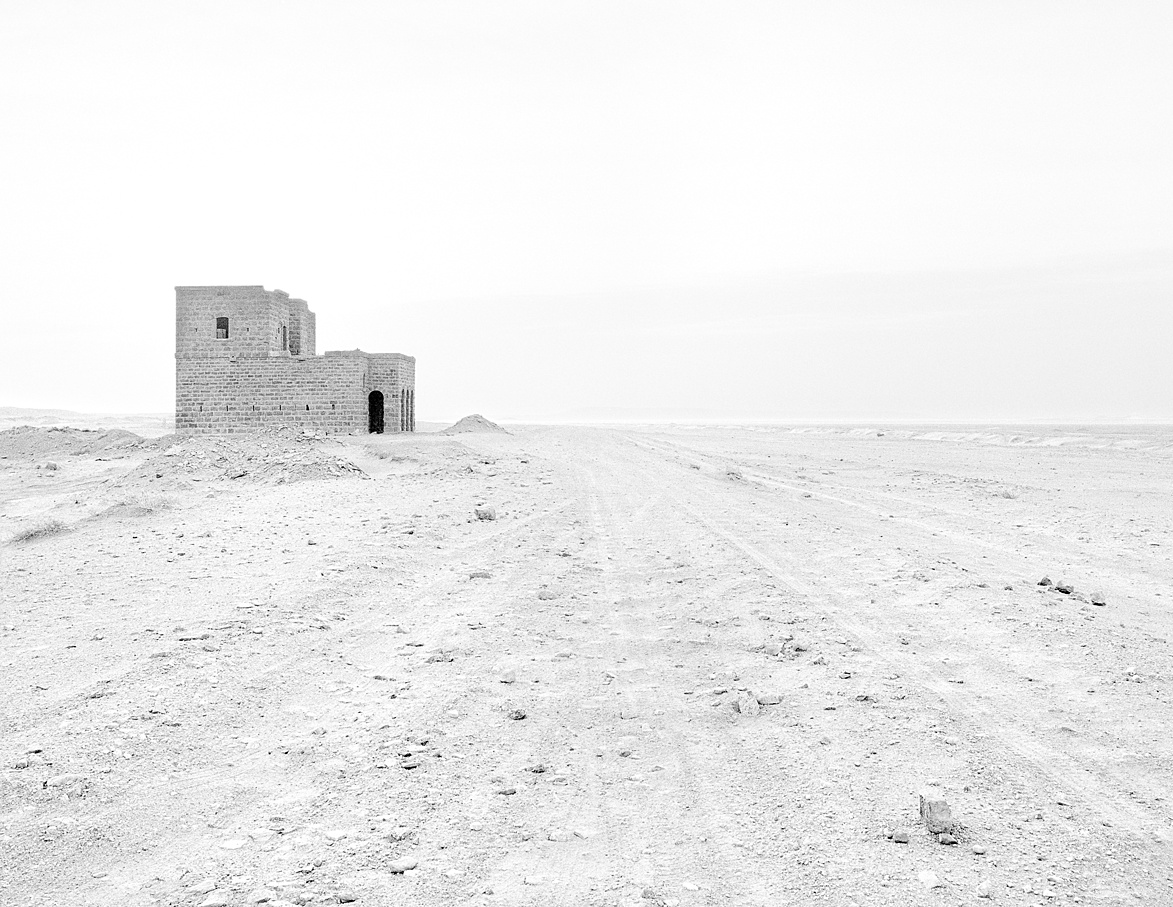 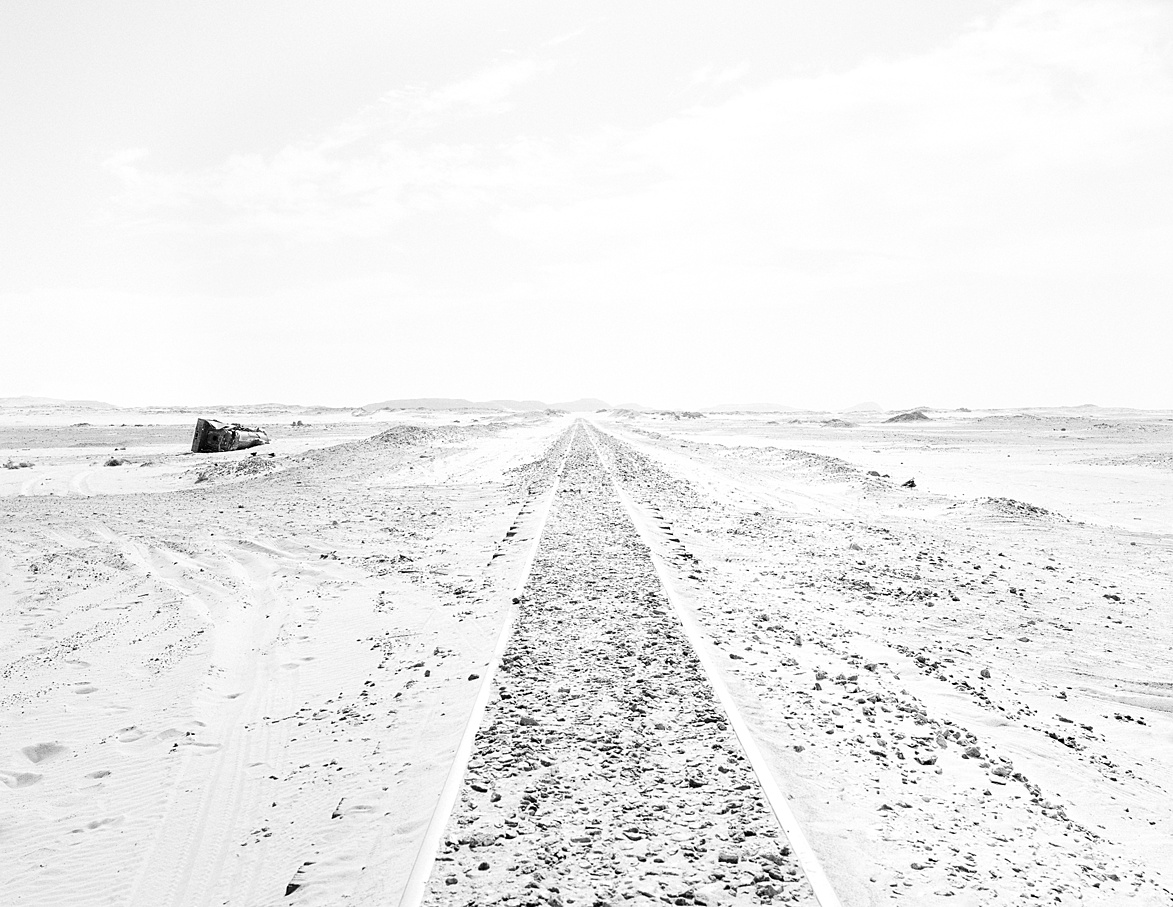 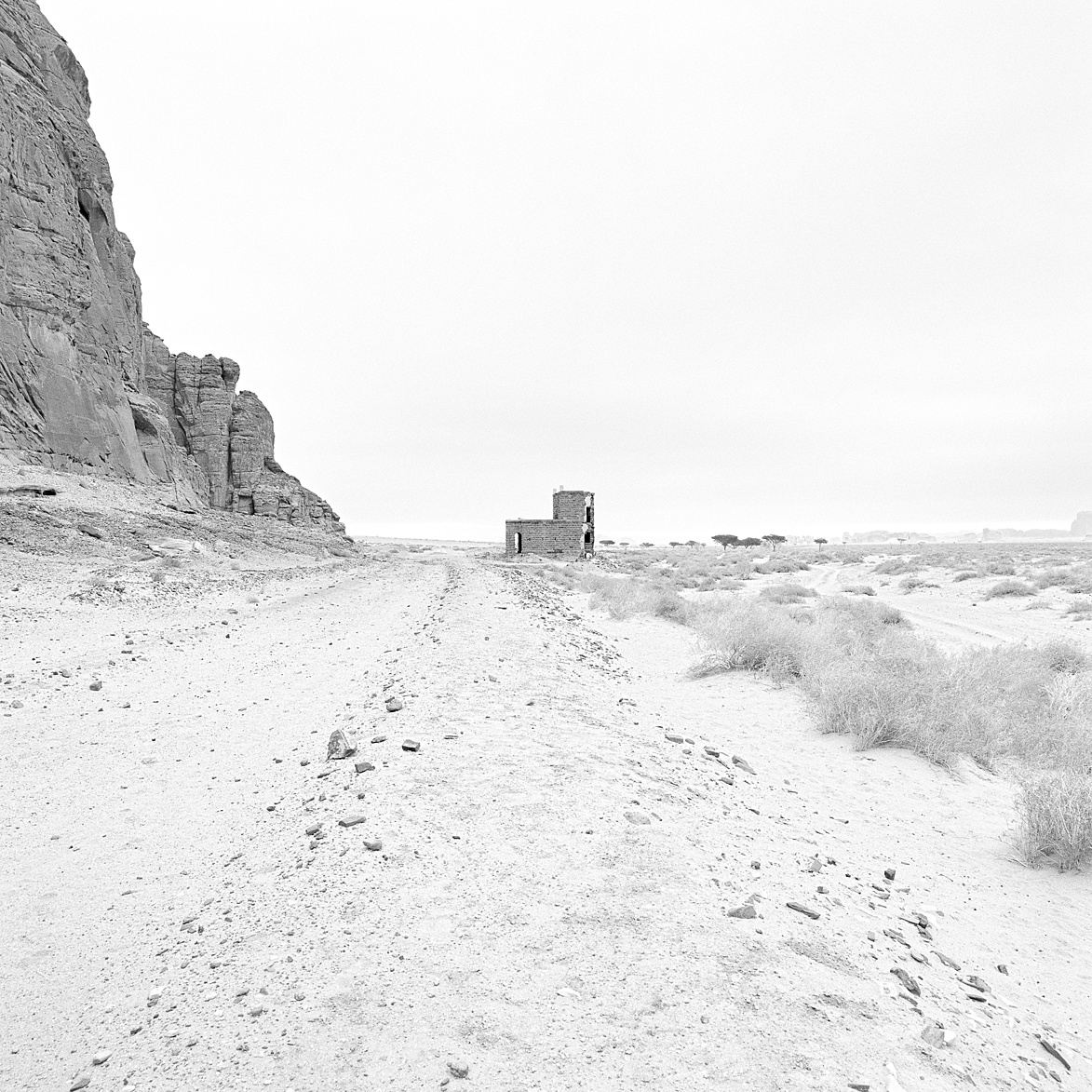 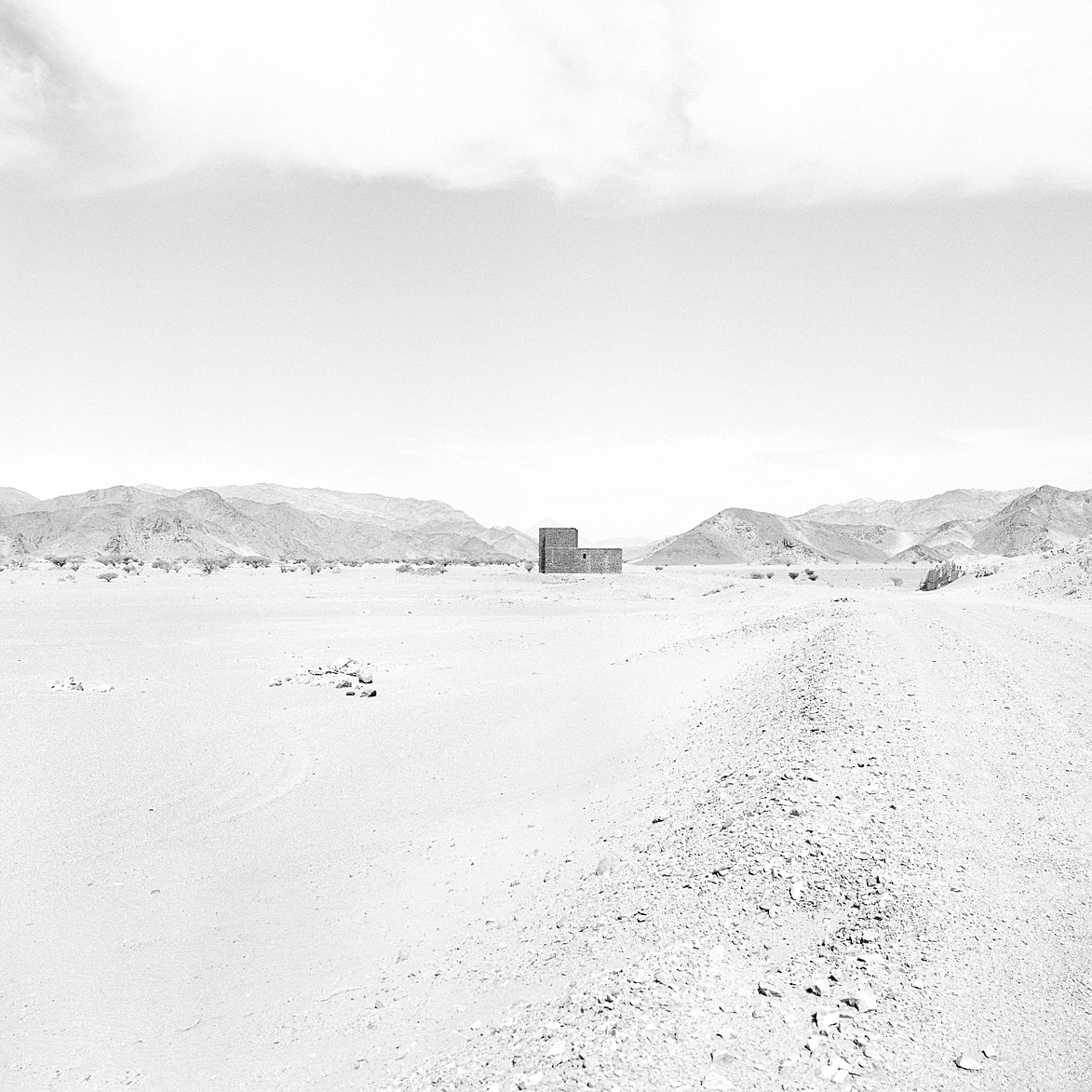 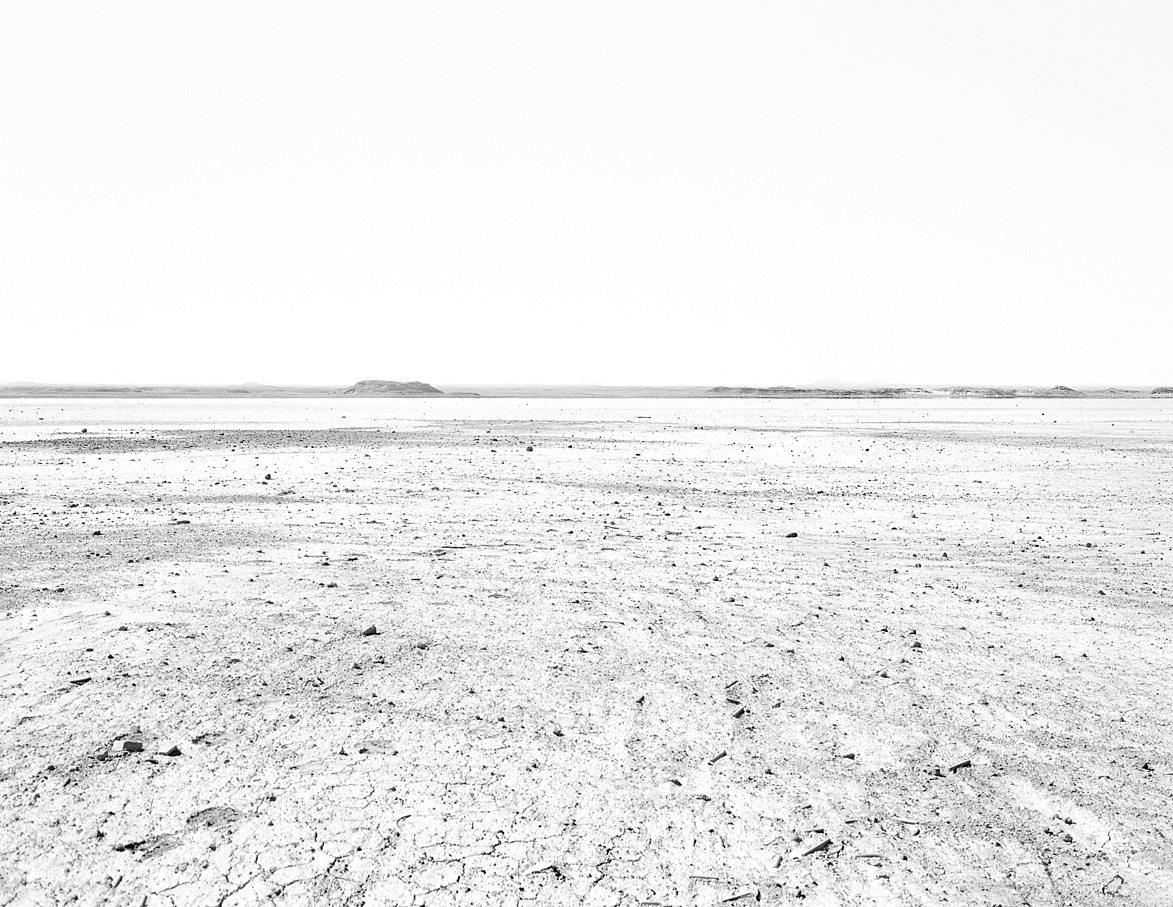 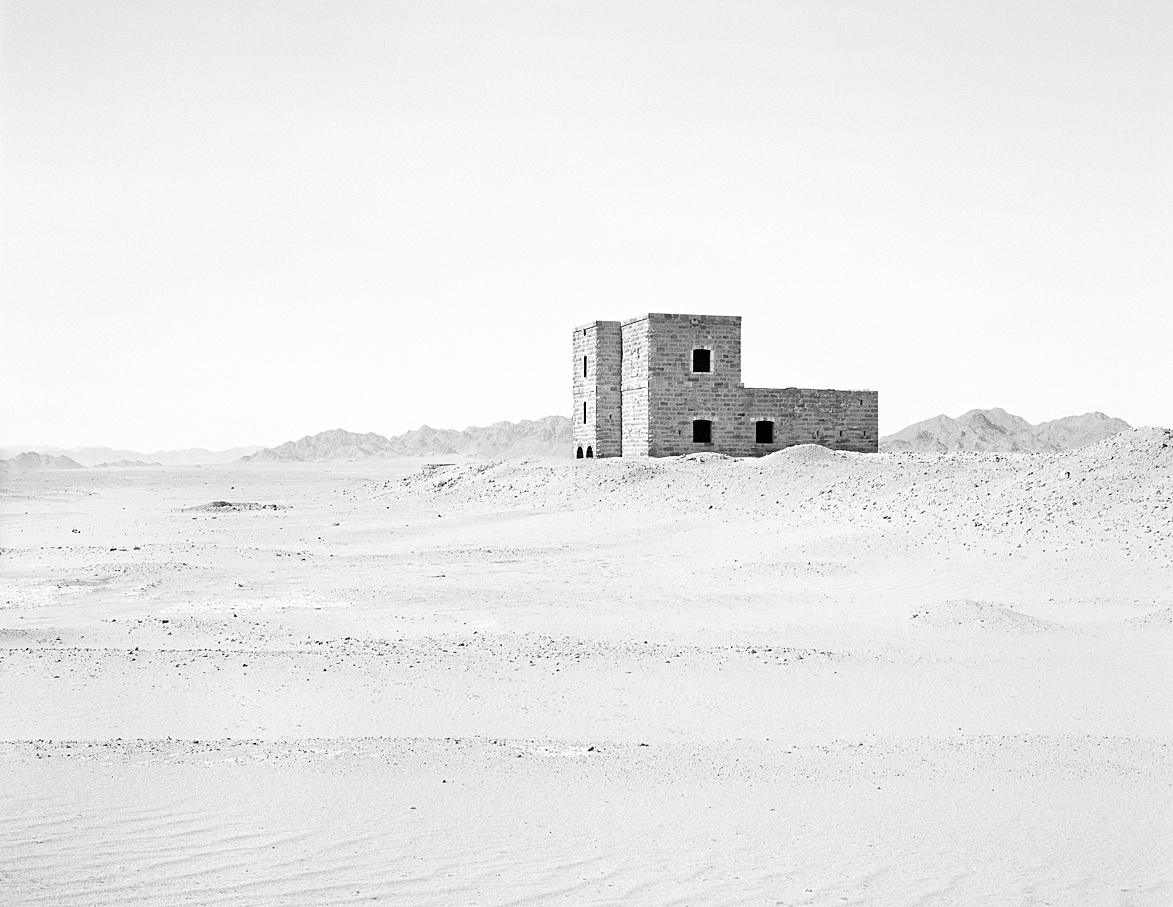 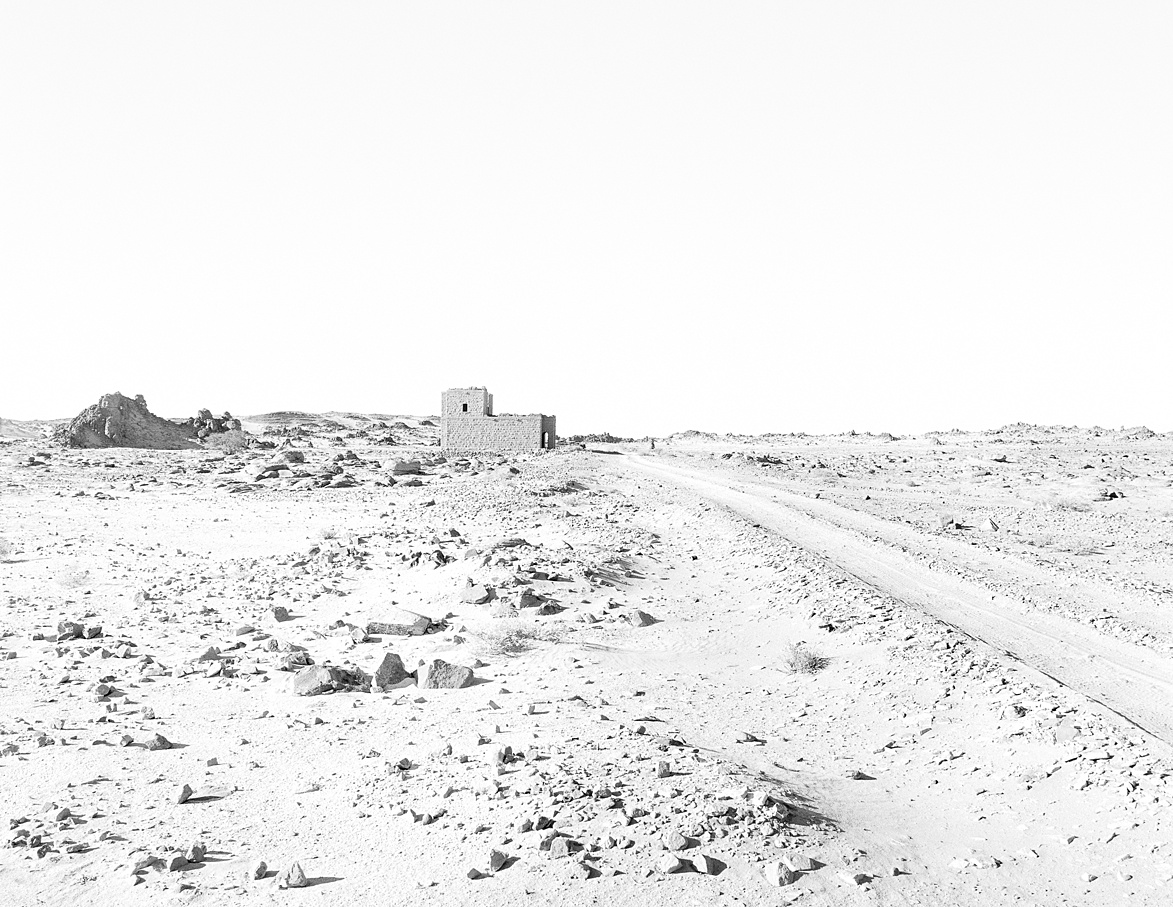 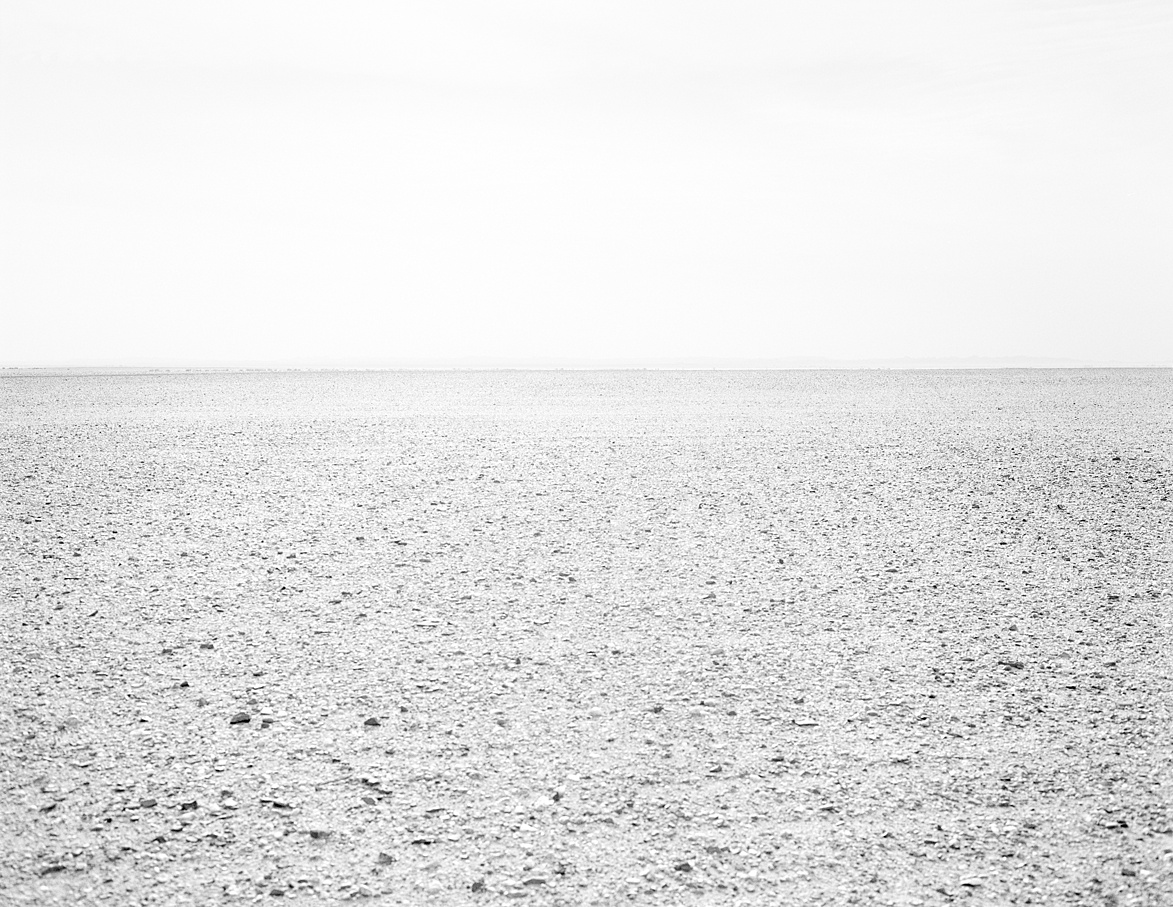 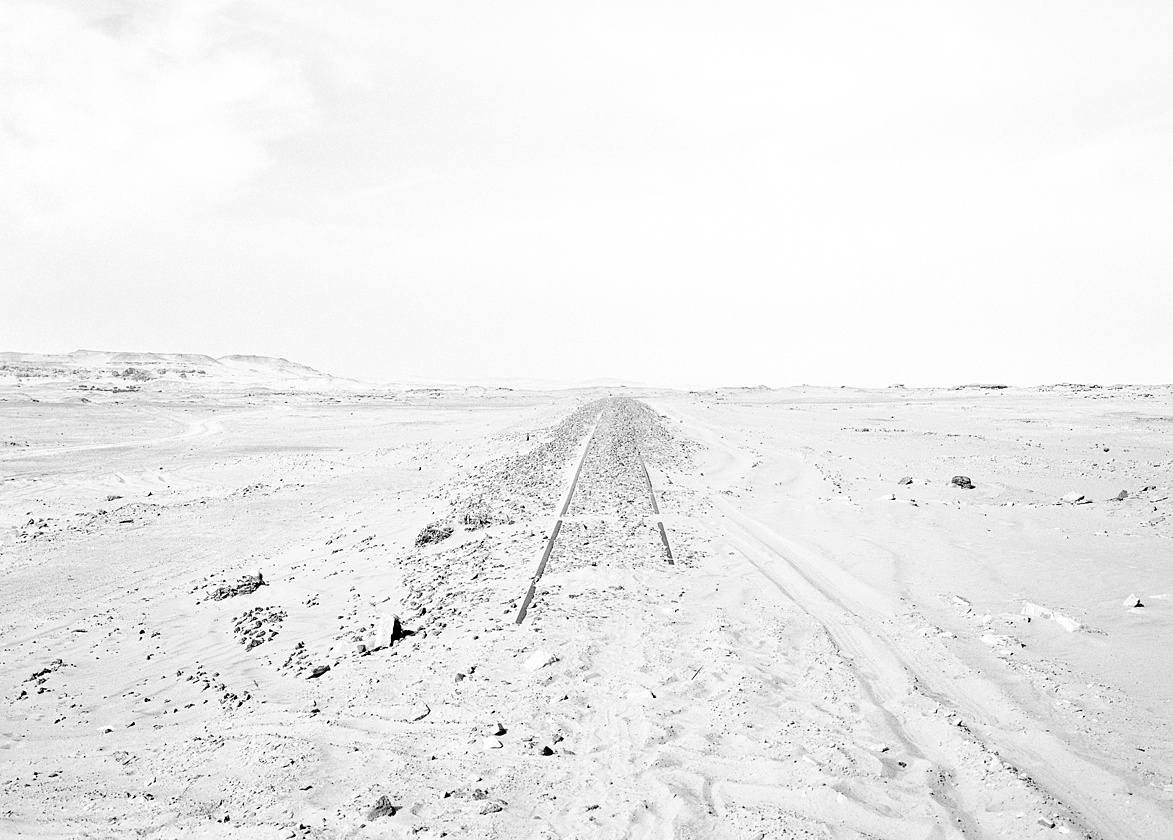 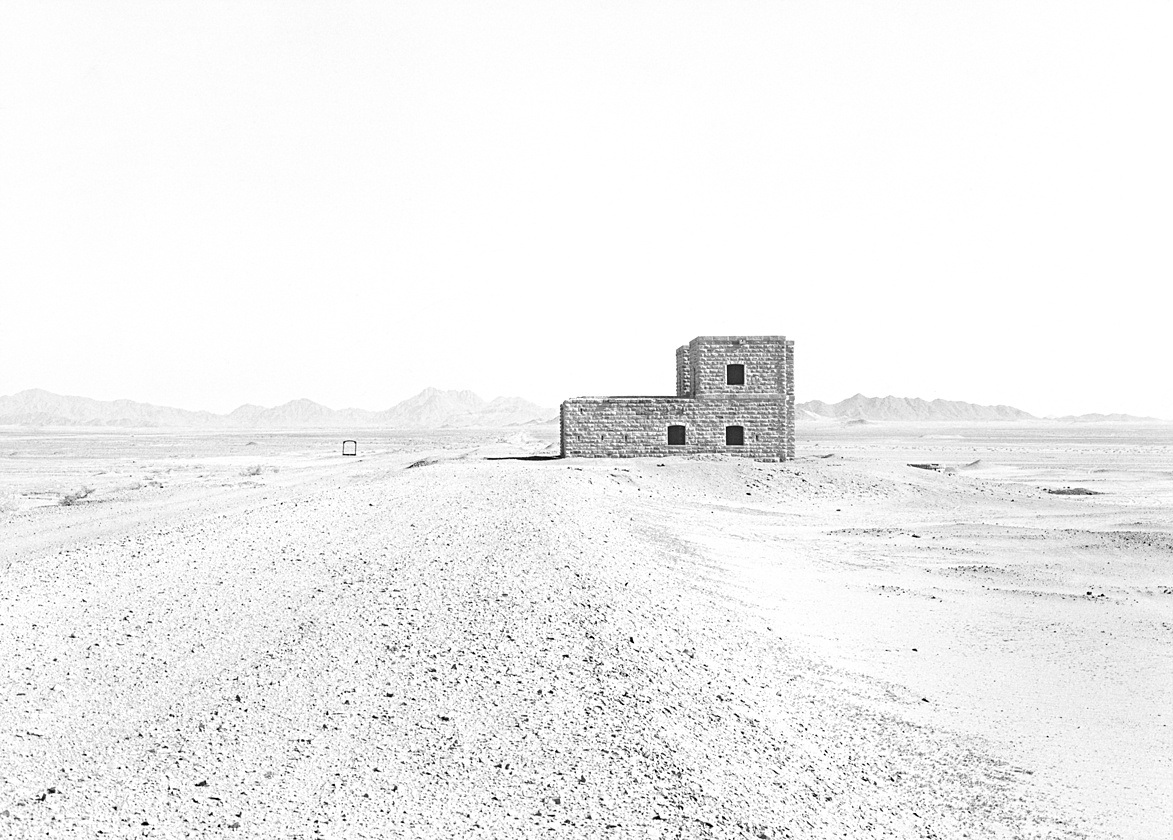 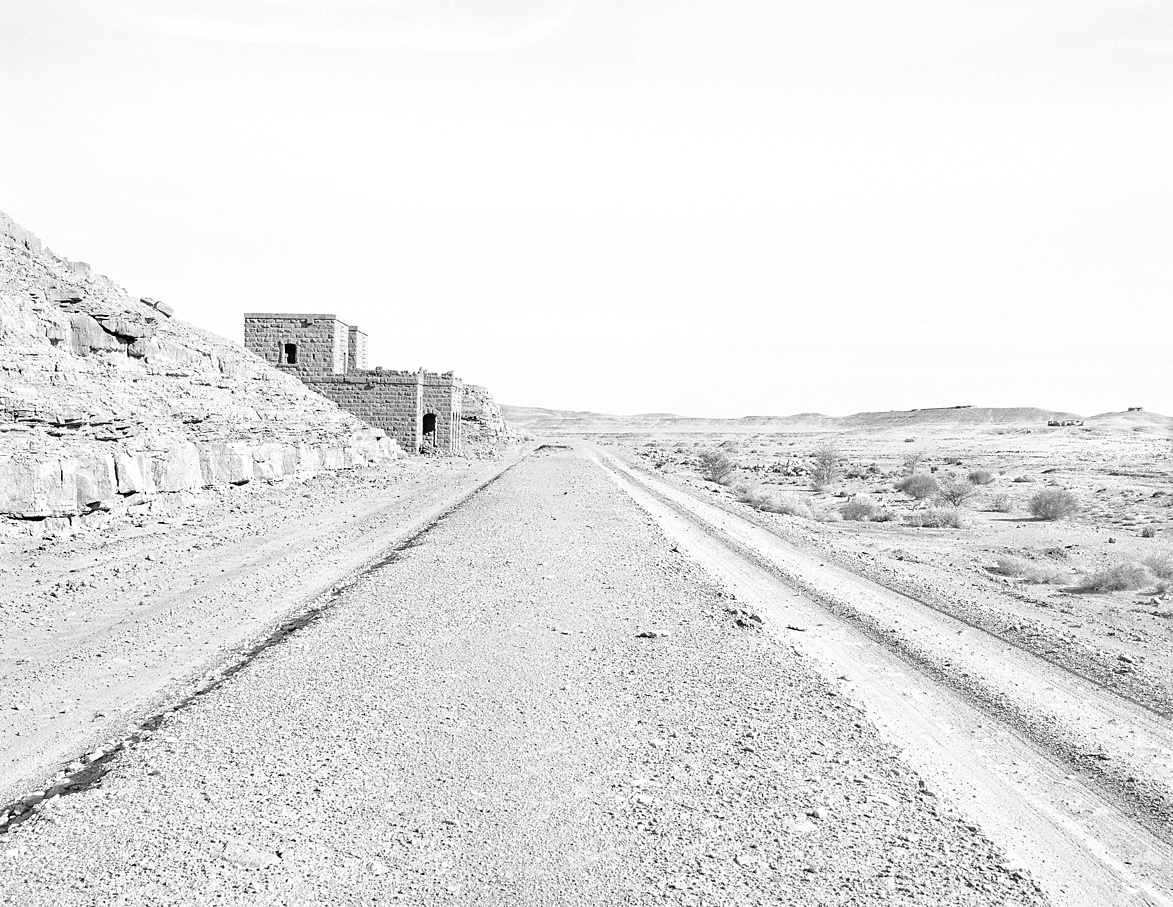 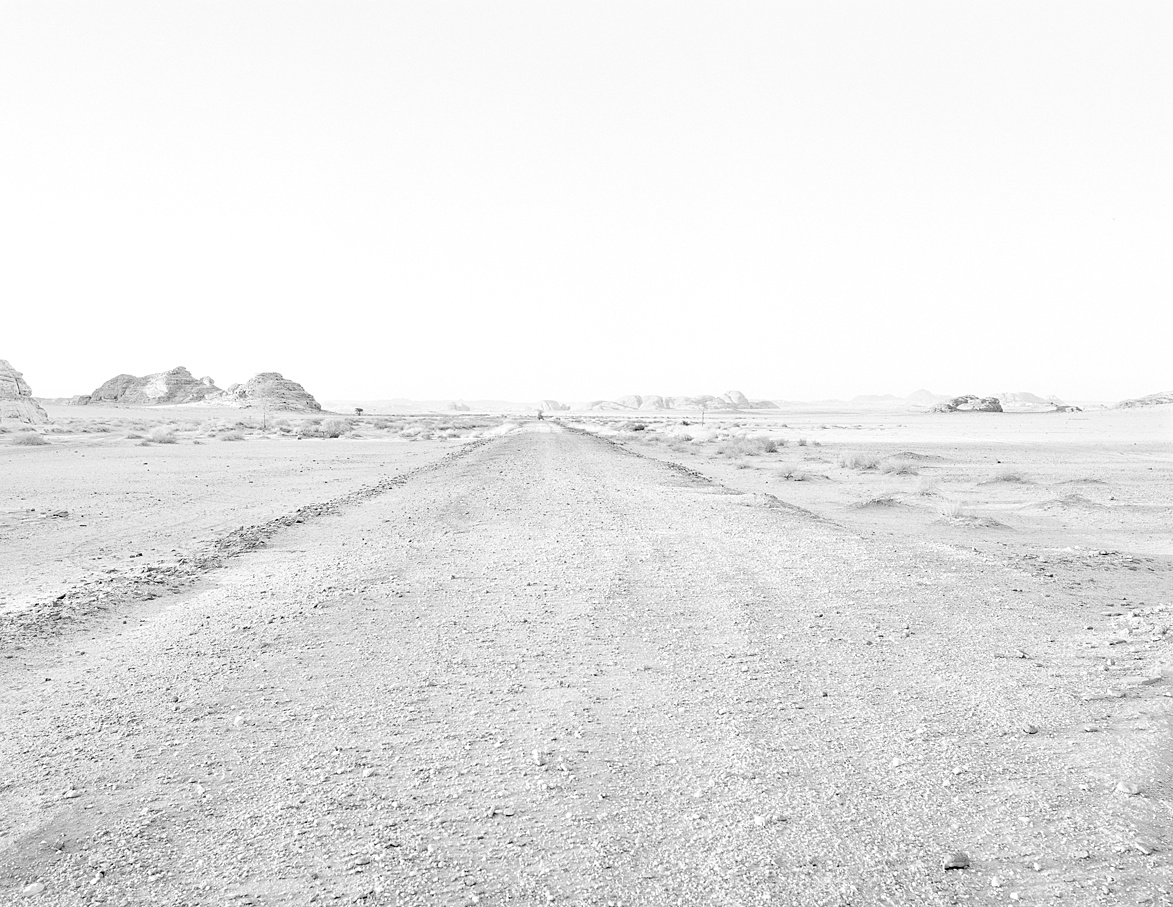 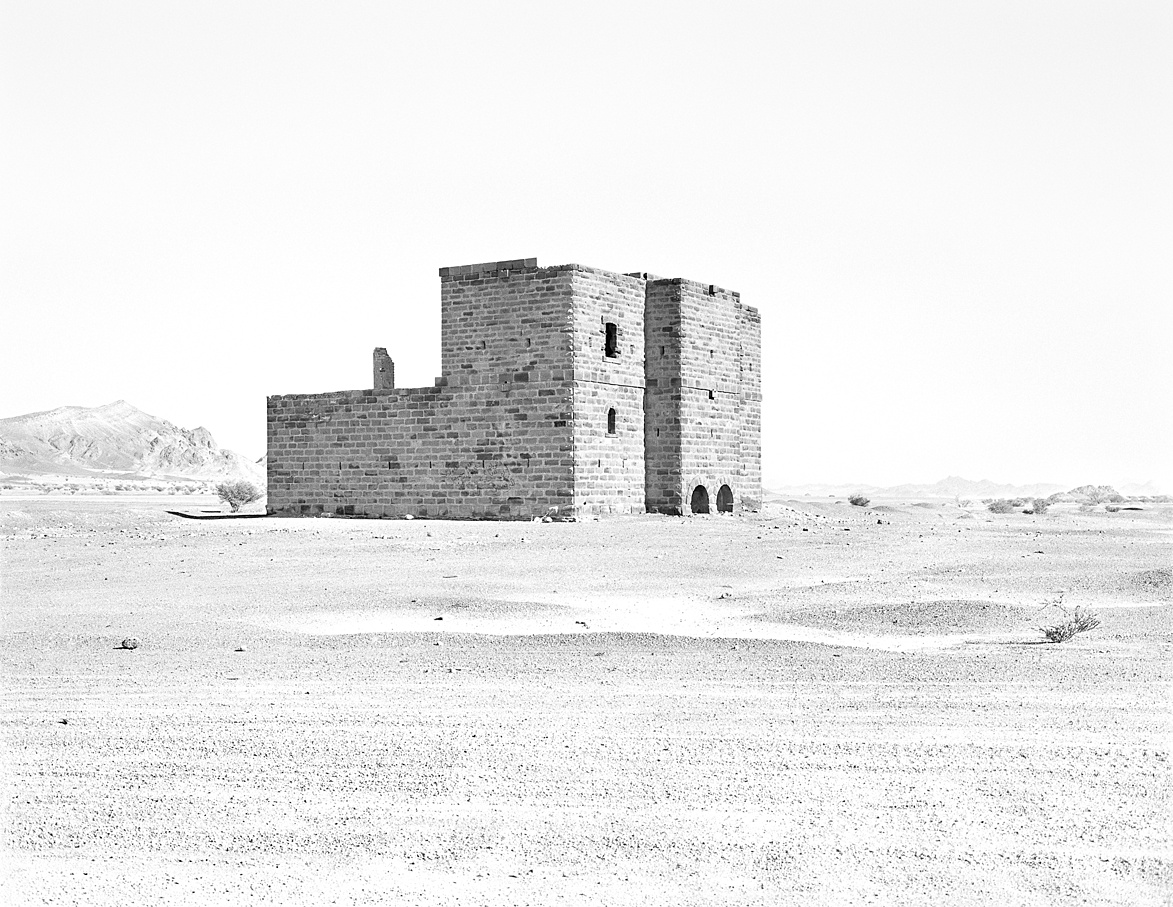 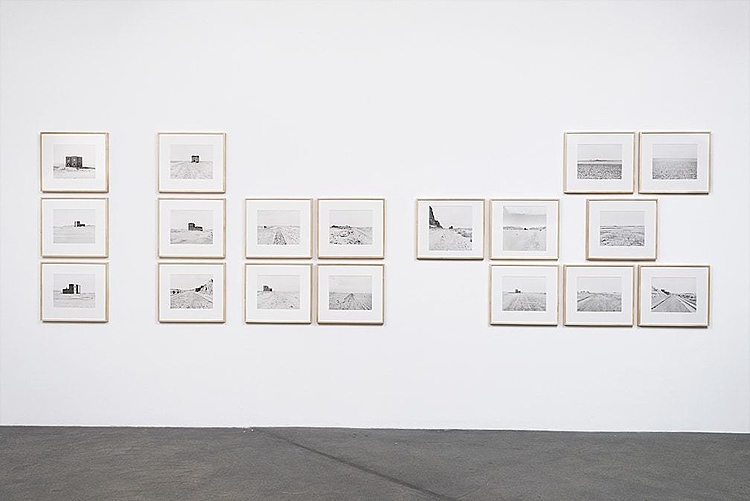 Gallery Luisotti is pleased to present the upcoming exhibition Ursula Schulz-Dornburg, Bricks and Mortals. The exhibition’s title is a reference to Tom Wilkinson’s 2014 book Bricks & Mortals: Ten Great Buildings and the People They Made, and speaks to Schulz-Dornburg’s ongoing interest in architecture as the infrastructure of history. Bricks and Mortals will feature a survey of Schulz-Dornburg’s work, including a selection from the series Sonnenstand (Sun Positions), made in Spain, 1991, Hejaz Railway, Saudi Arabia, from 2002–2003, Palmyra, Necropolis, from Syria, 2010, and the work Opytnoe Pole, Kazakhstan, 2012.

In her first exhibition at Gallery Luisotti, Schulz-Dornburg featured Bus Stops (1997–2011), a typological documentation of Soviet-era, Brutalism-inspired architecture found in Armenia. Leah Ollman, of the LA Times, summarized the work by writing, “Transition is the operative word here, and limbo the pervasive condition.” While Ollman was commenting on the transitory experience of a bus stop, her words likewise apply to Schulz-Dornburg’s use of the camera to present architecture as a marker of social change. For instance, Bricks and Mortals will feature Schulz-Dornburg’s work made at the Semipalatinsk Test Site in Opytnoe Pole, Kazakhstan. Photographed in 2012, these remnants of the Soviet nuclear weapons testing program are today barren concrete forms scattered across a stark landscape. Though the site was in use as recently as 1989, Schulz-Dornburg’s photographs historically distance the place, rendering it as an eerie echo of similar locations in the American West. The same might also be said of Schulz-Dornburg’s photographs of the abandoned Hejaz Railroad in Saudi Arabia. Photographed in 2002 and 2003, from Medina to the Jordan Border, the series depicts the scant remnants of the Hejaz Railway line that was originally built to link Constantinople (presently Istanbul) to the Ottoman Empire’s Arab provinces. Constructed in the years prior to the First World War, the remnants of the railway mirror the 19th century American sense of Manifest Destiny.

For all her fascination with modernity, Schulz-Dornburg’s camera is equally at home in a more distant past. In her Sonnenstand series, made in 1991, the photographer chose as her subject a number of medieval chapels in Spain. The set featured in Bricks and Mortals was taken at Santa Maria de Melque, an 8th century chapel on the outskirts of Toledo. In order to express the experience and structure of the place, Schulz-Dornburg pairs images of the interior with one of the exterior. In doing so, the photographer finds a material at the heart of both architecture and photography: light itself. She also presents the passage of time in the beams of light that act as a sundial. The chapels have in their Romanesque architecture Moorish formal references. For that reason, Schulz-Dornburg’s making of this work between the first and second Gulf Wars is particularly poignant.

Perhaps Schulz-Dornburg’s most ancient subject has been the necropolis at Palmyra, in present-day Syria. Photographed in 2010, shortly before archeological excavations were halted in 2011 due to the Syrian civil war, and prior to the site’s partial destruction by ISIS in 2015, the photographs are both a remnant and reminder of how quickly human history turns to dust. As the scholar Eduardo Cadava once wrote, “there can be no thinking of history that is not at the same time a thinking of photography.” Add to that equation of historical inscription the role of architecture, and one arrives at the grand ambitions of Schulz-Dornburg’s photography.

The Stations of the Hejaz Railway
Shoair Mavlian

Eighty-five years after the end of the First World War, German photographer Ursula Schulz-Dornburg retraced the Ottoman railway line that once linked Damascus and Medina, sections of which were blown up by Arab guerrillas during the war. The Hejaz Railway was one of the great engineering projects of the Ottoman Empire. When work began in 1900, it was intended to run between Mecca and Damascus, ultimately connecting to the empire’s capital in Constantinople. The railway would therefore serve pilgrims to Mecca, but also strengthen the Ottomans’ administrative and military hold over the Arab region. By the outbreak of war in 1914, the route from Damascus to Medina was complete, but it became a prime target for bands of Arab guerrillas that famously included T.E. Lawrence. After the war, as the Ottoman Empire itself disintegrated, the project was abandoned. Following the path of the Hejaz Railway in 2003, Schulz-Dornburg discovered that while much of the track has been destroyed, the station buildings remain, standing purposeless and empty in the desert. Her photographs memorialise the relics of a vanished empire.

The Hejaz region, located in the western part of the Arabian peninsula, stretches along the mountainous coast of the Red Sea between the Gulf of Accaba and the highlands of Asir.

Paths. Routs of pilgrimage. Caravan roads since the beginning of time. Where people moved, a new path came about. The great incense road. In the Islamic period, pilgrimages to the holy shrines of Islam in Mecca and Medina. Nomads' country, where one of the countless gods of this region bore the name: He Who Drinks No Wine and Builds No Home. Along the way: writing, graffiti on boulders and stones, in Arabic, Aramaic, and characters from languages no one knows any longer.

The Hejaz Railway was built under Ottoman rule between 1900 and 1908, constructed by the German engineer Heinrich Meissner. It covered a distance of 1,300 kilometers between Damascus and Medina. In rebellion against Ottoman rule and with the support of T. E. Lawrence, the legendary Lawrence of Arabia, Bedouin tribes destroyed the railway line in 1916-17.

All that remained behind in this nowhere land are these train stations, at which no trains halt, no one waits. Standardized architecture, consisting of two rectangular forms, arranged in the shape of an "L", a few openings for windows. The tracks have been tarn out, the roadbeds trace vague gravel trails across the desert. The path is reclaimed by the stratigraphy of history, which is rooted in the nameless.

Profound silence is spread across the barren scenes. In this silence, in the light of their imminent disappearance, these functionless buildings acquire the most intense presence. In 2003, Ursula Schulz-Dornburg followed this path and photographed what amounts, for the time-being, to the last layer of occurrence at this location on the planet, both looking in and looking out.